From The Kitchen At Canyon Keep #10: Ah’Dwina’s Harvest Pot

Harvest is in full swing here in our region of Viridia.  The great harvesters run day and night, skimming over the fields of alcibus, mazea and phaselus.  Trundlers pulled by teams of horses are moving load after load of hay into the barns for Aellaeno and Chionos, those seasons when the snow is too deep for the livestock to forage.  The children are out of school for High Harvest, and all the youngsters here on the keep have something to do toward putting up stores for the seasons of snow and cold. 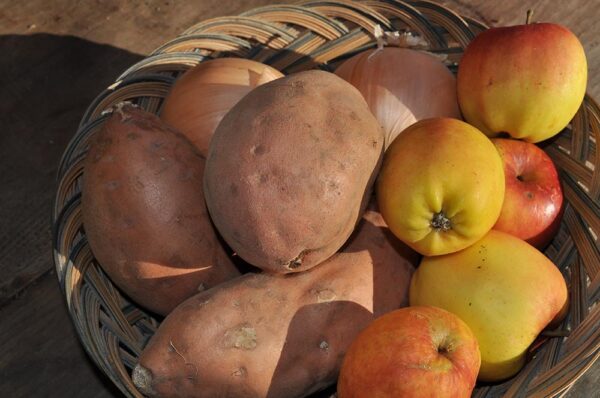 I watched two little boys pulling a wagon down the rows of caulis (what you would call cabbage), picking up the heads as their father cut the stalks in front of them.  They came later to rake leaves.  They spent more time jumping in the piles than actually accomplishing anything, but they were very cute.  I am working Ardi in the direction of having a child of our own soon.  I know the Equi here on our homeworld tend to wait many years after marriage to produce children, but our Terren culture is different, and I’m trying, gently, to remind him of that.

It is frosty in the mornings, but by noon it is warm enough to feed the harvesters outdoors, and we have long tables set under the trees for that purpose.  Those who are cooking bring out huge dishes of food, and everybody eats together, which makes for a kind of ongoing festival.  Today an old Auntie set a dish on the table that was both pretty and delicious, and she says it is very easy to prepare, so it becomes this week’s love offering to you.  It is below, as usual, and as usual you can easily adjust it for portion size.

Hug each other for me!

All my love,
Ree 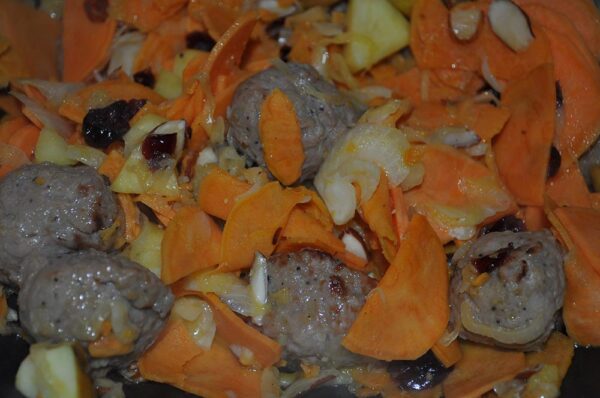 Slice the sweet potato thin or cut it into small chunks.  Do the same with the apple and the onion.

Sauté the sausage balls and remove them from the pot, then add a little butter and sauté first the onion, then the sweet potato and apple.

Up-end these into a baking dish, pouring any extra butter that is in the bottom of the pot over top of the dish.  Mix in a handful of slivered ammons, and a handful of dried or fresh red bog berries.

Poke the sausage balls down into the top until they just peek above the surface and put covered dish into a slow oven until you are ready to serve it. If you are in a hurry, this can be done in a large pot or wok and the slow baking can be skipped.